A downloadable game for Windows

Terran Mining Company is a 2D real-time strategy (RTS) prototype in which the player is tasked with defending their base against waves of hostile aliens.  I undertook this project as part of my final year studies at university.

The player can give orders to their units to manoeuvre across the battlefield in order to defend territory and engage in combat with the hostile aliens. The player’s units are semi-autonomous in that they will automatically engage the enemy when in range and will also pursue moving enemies.

The hostile aliens that the player must defend against are an increasingly difficult threat as they attack in greater numbers after each consecutive wave. The aliens are giant bug like creatures that will attack the player’s units and structures on sight. The aliens spawn into the level at the start of each wave at random points along the edges of the map.

Inspirations for this project include traditional RTS games such as the “Command and Conquer” series by Westwood Studios, the “Age of Empires” series by Ensemble Studios, the “Starcraft” series by Blizzard Entertainment, as well as the more recent example of “They Are Billions” by Numantian Games. This project was undertaken with the aim of adopting many of the core gameplay mechanics found in these games while also exploring the tools and techniques that can be used to create this gameplay experience.

Move Camera with WASD, arrow keys or by pressing down the middle mouse button and dragging.

Build units and structures using the build menu at the bottom right of the screen.
*You will need to build concreate tiles in order to place down large structures.
*You cannot build when the building is highlighted red.

There are two resources in the game, money and power, which you will need in order to build units and structures.
-Your money and power is displayed in the top left.
-You earn power by building generators.
-You earn money over time for each refinary you have built.
The main objective is to survive against the incoming waves of enemies for as long as possible.

You move your units by left click dragging a selection box over them and right clicking to issue a move order.
Left click the ground to deselect your units.
Your units and turrets will automatically engage the enemy on sight.

You can pause the game at any time and issue orders to your units and build structures by pressing the spacebar.

Please Note: the harvestor unit is only a place holder vehicle and cannot attack. 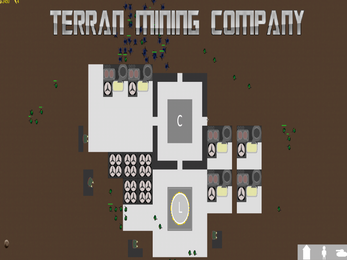